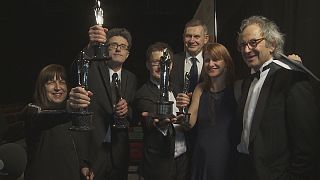 The 27th edition of the European Film Awards took place in the continent’s 2014 cultural capital Riga.

German film director and president of the European film academy stressed the importance of European cinema:
“Europe needs European cinema because it is an emotional language. Very often this Europe is seen as a financial and economic structure and not as an emotional homeland – and that’s what those movies do.”

“Cinema is a powerful tool, cinema could change lives, certainly change minds, I believe that artists… we have responsibility, not just to entertain which is what we do but to sort to try and push forward the idea of humanity,” McQueen said.

His last film, 12 Years A Slave, won him an Academy Award for Best Film and a Golden Globe for Best Motion Picture – Drama.

His 2011 film Shame, set in New York starred Michael Fassbender as a sex addict. Before that his 2008 debut Hunger about the 1981 hunger strike led by Bobby Sands in a prison in Northern Ireland was premiered at the Cannes Film Festival, where he received the Camera d’Or.

“This is the world cinema award so its not the life time achievement award – I made only 3 films, so it’s not the case of looking back, it’s looking forward, so we will see what happens, I don’t know what is gonna happen and will try to do things better which are interesting and we will see where it lands.”

Best Actor went to English actor Timothy Spall for his portrayal of the 18th century painter Joseph Turner in a historical drama written by Mike Leigh.

“It’s always challenging with Mike in a good way because he asks you to contribute and co-create the character,” the acclaimed actor said.

French actress Marion Cotillard won Best Actress for her role as Sandra, a young mother and factory worker who has to take time off after a nervous breakdown.

The management offers a 1,000 euro bonus to Sandra’s colleagues if they all agree that Sandra should be made redundant.

The award for best animated feature went to “L’arte della felicità” (The Art of Happiness) by Alessandro Rak.

The movie is about an angry young taxi driver in Naples who refuses to come to terms with his brother’s death. His brother had left for Tibet 10 years earlier but never returned.

Anna, a young novice nun in 1960s Poland, is on the verge of taking her vows when she discovers a dark family secret dating back to the years of the Nazi occupation.

“Cinema should evoke stuff, you should not just kind of drag the audience through the film and go look at this, look at this and this is where you cry and this is where you laugh, but (it should) create a certain kind of language that suggests more then it says, you know – and then all which stay much longer in peoples memory and imagination,” said the film’s director Paweł Pawlikowski.