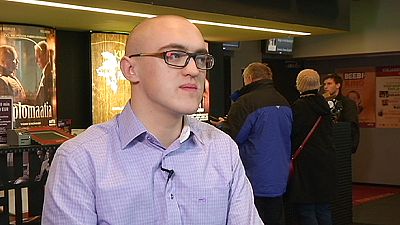 It is 1941. Much of eastern Europe is under Soviet rule.

On June 14, authorities in Russia gave the command to deport more than 40,000 Estonians, Latvians and Lithuanians to the cruel climes of Siberia.

Fast forward to 2010, when Estonian director Martti Helde began to piece the story together in cinema form. Using letters, from relatives and friends and other archive material, the young filmmaker created ‘Risttuules’ (‘In The Crosswind’).

It tells the story of Erna, a 27-year-old philosophy student who is separated from her husband; he is sent to a prisoners camp, while she and their small daughter are deported to the uninhabited territories of Siberia.

Helde took the bold, if potentially controversial, decision to tell the story using an unbroken series of still images. The actors stand stock still in dramatic poses, while the camera weaves through them.

It took three and a half years to put together and makes for an impressive feature debut for the 27 year old.

Euronews’ Anja Bencze spoke to Martti Helde about the film at the Black Nights Film Festival in Tallinn.

“You are the youngest director at this year’s Festival edition and present a movie that deals with a very dramatic historic event in a very original way. It is also your feature debut. How did this project come up?”

“We went to Thessaloniki, a documentary festival forum, (and) people said it is not a documentary. You should shoot it as a full length feature. So it was an accident.

“But the idea: my grandfather was in prison camp. In my relatives, I knew there were some letters circling around which are family relics, so to say. I had some really strong connections about the topic, plus the documentary thing. It was a perfect platform for me to make the film.”

“Can the trauma of the deportation of Baltic populations by the Soviets in 1941 still be felt in modern society?”

“It is really hard to find a family who is not attached to the history. I think the deportations have changed the Estonia of today. In that sense it is really sharply in our hearts. We still remember it, we still talk about it. In June or March, when the media talks about it…

“It is one piece of how Estonians are today. It is really hard to put into words. But basically, if you look at what Estonians are doing today, then it is a reflection of what happened. Because we are keeping this topic closely in our hearts. It’s natural, so to say.”

“The movie is based on real events. Can you tell us a bit more about the background?”

“About 60 percent of the letters are from my relatives. Erna Tamm (the name of the main character in the film) is a changed name, of course. And 40 percent of what you can hear in the film is archive material and biographies all mixed together. I wanted to put in something from other Estonians. So I decided to mix those two mediums, to create something universal that would show the event more widely.

“The idea was to make an Estonian film in that sense. Many Estonians can relate to the story. To make it wider than the letters, that came from my side, my relatives’ letters.

“You staged a movie in stop-action pictures, can you explain your artistic choice?”

“The idea actually came from one precise letter, quite the first one I read. There was a line: ‘I feel like time has stopped here in Siberia. That my body is in Siberia, but my soul is still in my homeland.’

“Then it struck me that a wanted to make a film, where everybody and the time has stopped. To recreate the feeling; what those people in Siberia felt.

“The reason was, I wanted the audience in the cinema to feel the same way, how people in Siberia felt. I wanted to take away the freedom of the audience, so they can’t choose where to look, where is the focus point. So this kind of recreation of this feeling was the main idea.

“But to create the film, I would never recommend it to anybody. It took us two to six months to prepare one scene. Then we had one day for shooting. Then we had like two or three days off and we started to prepare another scene. So the whole process of the shooting period was three and a half years. So it’s quite nerve-wrecking!

“How did the actors react?”

“It was so crazy, this idea, they loved it. When I went to meet Laura Peterson who is the main actress, she said: ‘It’s so crazy this idea, I want to make it.’

“And what does the public say?”

“It was surprisingly successful in Estonia, even though it is a real art-house film. We thought that a maximum 2,000 people were coming to see it. But the topic was so important for everybody, and a real good buzz started to circle around the film. So many, many people went to see the film. And also some people went with their grandparents. It’s really rare today that grandmothers and fathers are going to the cinema. But youngsters took their grandparents to talk with them afterwards.

“It is a really nice thing. Especially for the older generation, it was important, that this kind of film exists.

“So, I got many emails and even real letters from older people and they wrote: ‘Thank you, for making this film. I was waiting for it’. It was the biggest compliment I could ever expect.

“It was shown in Toronto, Warsaw, Thessaloniki, Mannheim… Any other festivals or international releases?”

Martti Helde: “I can’t tell you anything.”

“And your next project?”

“Hard question, I’m writing an idea at the moment. I’m writing a psychological drama. Everybody is moving, they are talking, life action!

“My goal is to make the next film even more touching and deeper. I don’t want to go crazier. But I want to go not outside, but inside. That’s my goal.”

Estonian cinema in the spotlight at film festivals worldwide