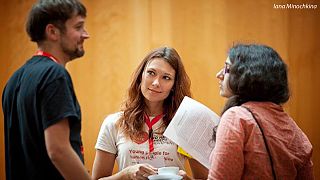 Have you been a victim of hate crime? Have you used hate speech? Have you seen hate speech online? Did you ignore it?

I bet that the answer to at least one of those questions is “Yes!” Hate speech is present in our society – both online and offline, and we are so used to it that we hardly notice it anymore. But can we change that?

Iana Minochkina is a young Russian with clear ideas for the future. Her background is in economics and she is passionate about human rights. Since April 2013 she has been one of the online activists of the No Hate Speech Movement.

The No Hate Speech Movement is a campaign run by the Council of Europe that involves people from at least 47 countries. The ultimate goal is to achieve recognition of hate speech online as a social problem, to educate young people on the topic of human rights and to increase youth participation and media literacy.

“The No Hate Speech Movement stands for a simple thing – human rights should apply equally online and offline. When we say “No” to hate it is not about censorship – it is about educating people that we build safer internet altogether – everybody has the capacity to change things for the better,” says Iana. 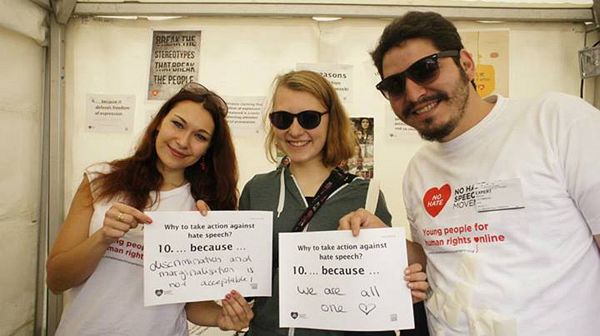 The campaign is taking different forms in the different countries. However, certain dates unite everyone involved – for example, July 22 was the European Action Day in Solidarity with Victims of Hate Crimes. “It was a day to remember the victims of hate crime, to show solidarity with those targeted, raise awareness and educate people about hate crime and its consequences on society.”

The next action day will be on September 22 and will be against islamophobia and religious intolerance.

Most of the activities of the campaign are online, because the hate speech present there seems to be increasing. The campaign’s website provides vital tools for everyone who wants to help the movement: you can report hate speech that you have seen online, there is a photo competition that aims to raise awareness of the problem and there is also a petition to make July 22 an official European Day for the Victims of Hate Crimes.

Some would say that Iana’s role is harder than the role of the online activists from other parts of Europe, because of the current situation in Russia. “The situation in Russia is quite complicated, not only due to political reasons, but also because of the quite strong patriarchal traditions and traditionalism,” admits Iana. “This is aggravated by the very aggressive language of mass media that shape values and minds in the community. For me the alarming thing is that recent political agenda in Russia and its reflection in mass media distort core values of sustainable co-existence.”

“In a complicated political situation, the government tried to put blame for social problems in the country on LGBT people and migrants – and it was easily followed by the community because these groups have already been marginalized. Instead of solving real problems such as corruption, decrease in the quality of public services and increasing gap between the rich and the poor, the state and mass media are trying to draw away public attention by shifting it to “hot issues.”

“At the same time, the same things are observed in many other countries, following the growth of the nationalistic agenda in Europe. The biggest challenge is the same everywhere – to educate people to see beyond the things that they learn from state mass media – and the best thing to do in this case is to learn by personal experiences.”

Do you accept the challenge?