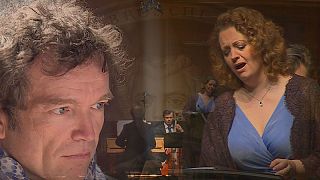 Twenty years after the successful feature film of the same name, a concert in London is paying tribute to the greatest singer of the Baroque era – Farinelli.

Carlo Broschi Farinelli was the most celebrated castrato of his time.

His repertoire is being brought to life again at London’s Wigmore Hall, to show the world his extraordinary artistry.

Today, Swedish mezzo-soprano Anne Hallenberg bravely steps into the shoes of the great castrato, under the baton of Christophe Rousset.

For Rousset, who we interviewed at Handel House Museum, Farinelli was also an artist capable of deconstructing his art in a critical way.

“I was really struck by one of the Austrian emperor’s remarks to him: Charles VI said “You’re good but I’m still unmoved because your art is not expressive enough’. Farinelli was devastated by this, and started questioning himself, searching for even greater expression. In the end he managed to really move the London audience when he performed here: his rendition of “Alto Giove” by Porpora was a huge hit!”

Anne Hallenberg says the sheer scale and range of Farinelli’s repertoire pushes her to the limits, professionally.

“When people ask me about the repertoire of Farinelli I usually say that it is one bar too long, one note too high, and one note too low! It’s stretching in every direction, and you somehow have to find a technique on how to survive this, because the man was a monster, he was a Frankenstein’s monster, simply. But if you look at Farinelli’s repertoire, it’s not like he’s always going out and being the big hero, he also has this intimate side.”

Cadenzas and ornaments are the very essence of Baroque singing. Anne modestly prefers to trust the conductor’s choices.

“I’m lousy, I think, at inventing my own ornaments, I’m really awful… so I’m very happy when a conductor says: ‘I’ll write them’. Thank you!
I think my work is to make them sound improvised, like they are coming from within, and they are a little bit. Usually I have a sort of ‘library’ at the back of my mind to pick from.”

Conductor and harpsichordist Christophe Rousset thinks Carlo Broschi had a softer side to his personality:

“Farinelli undoubtedly loved the limelight, but it seems that he was a real gentleman, a decent person of integrity. I think that he put his spiritual life before his career ; and this was probably behind his early retirement from the glitzy world of opera.”

In this story it’s possible to hear fragments from the following pieces:

“Son qual nave” (from: Artaserse), and “Ombra fedele” (from: Idaspe), by Riccardo Broschi; as well as “Sì pietoso” (from: Semiramide riconosciuta) and “Alto Giove” (from Polifemo), by Nicola Porpora.