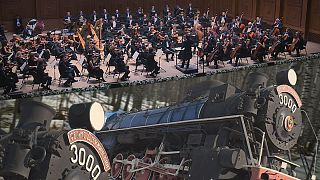 Like an invitation to travel on the legendary Transiberian Railway, critically acclaimed violinist Vadim Repin takes us on a voyage of musical discovery. For the first edition of his festival the main venue is Novosibirsk, Russia’s third biggest city and Siberia’s capital.

The orchestra was conducted by American Kent Nagano.

“When you think about Trans-Siberian, travelling immediately comes to mind,” Repin told euronews.

“First of all, the journey that Maestro [Nagano] has taken to come all the way to Siberia; then the musical journey that we made is to me exactly the same as a real journey, especially when you have to share this journey with somebody you love, somebody you respect; and then, being on stage, you actually share these moments with people who’ve come to take the journey with you.”

For two weeks the festival composes a musical itinerary, with concerts and events every day, in and around Novosibirsk.

“It’s this ‘fixed idea’ that returns in a constant variation, that is never the same… a feeling of universality through the whole piece which is a metaphor for life – in life we go through cycles and we revisit various events in different ways at different times of our lives – and this idea of an idea fixed going from the beginning to the end through a so-called artist’s life… nothing had been composed like this before; this was a moment of pure genius,” Nagona said.

Novosibirsk today is a city on the move, where the vestiges of the past struggle to survive alongside encroaching modernity. Still, it boasts several magnificent venues, including a superb opera house. Repin made the most of it.

“I feel really great to have at the opening night Lalo’s ‘Symphonie Espagnole’ because this is a festive piece, extremely energetic, phenomenally virtuosic and at the same time a profound musical composition,” the violinist enthused.

For the conductor Nagona, such events are needed more than ever: “What makes this festival so significant in the 21st century, particularly now in 2014, is the importance [this event gives to] dialogue. Who cannot agree that right now the world needs more dialogue, we need more communication? That’s what makes the timing of this festival so relevant right now, here!”