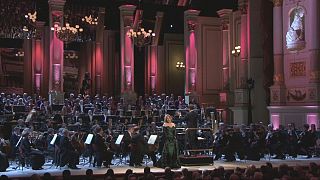 In the show Berlin met Broadway, with pieces from operettas and musicals sung by Renée Fleming and tenor Klaus Florian Vogt under the baton of Maestro Christian Thielemann.

Not everyone knows that this four-time Grammy award winner has had a long term ‘friendship’ with Germany and its music.

It all began almost 30 years ago thanks to a Fulbright scholarship.

“It was such an incredible educational experience, I was able to assimilate, absorb so much, and carry on, and finding myself on this track of first singing 10 years of Mozart – and I credit Mozart as a great voice teacher – and then moving right into the music of Richard Strauss,” she explained.

Fleming continued: “It was so challenging, to be alone and I wasn’t a particularly adventurous woman. In fact, as a young person, on the airplane on the way over here, I cried the whole way, and this stranger next to me said ‘Honey, don’t you think you should go back home?’. But I never would give up. It took me about six months to feel comfortable enough in the language to just not feel lonely although musically I loved it right away!

“I feel very at home here in Germany, very comfortable when I come here, first of all, having the language though obviously it’s not perfect, but feeling that I can move around freely, and communicate, that’s very important. Secondly, the music that is at the heart of what I do, namely the music of Richard Strauss, is so much a part of this culture. This theatre, I mean, when I’m here and I think about the premieres that took place here, I’m very moved by that!

“Culturally speaking, in Germany people were much more direct and honest than I was used to, so if I didn’t sing well my friends and my colleagues would say ‘Well, that was really bad! Gee, I’m sorry’, whereas in New York, when I was a student, they would say ‘Oh, that was wonderful’, when it was not good, so I came to appreciate that because I always knew where I stood, which was great.”

Renée Fleming is not only an opera star, she is also been a very fortunate artist who met generous colleagues on her path to stardom.

Leontyne Price summoned me to her home and said, ‘I see in you that you need help, that you’re struggling, you’re so in demand now, have so much stress, so much of what’s called ‘the noise’, and I just wanna help you understand that all you can do is focus on one thing, and that’s your singing and your voice’.

“She helped me immensely, I literally sat there and took notes. We stayed in touch and every couple of years I would say ‘Ms Price, can I have another session, please?’,” she concluded.

For more excerpts of our interview with American soprano Renée Fleming, please click on the following link:
Opera off stage: a diva reveals her ‘extracurricular activities’