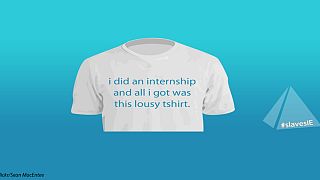 People are often in the habit of saying that everything is easier when you are young. You’re a happy person, you don’t have any serious responsibilities, and you have internal and external freedom. But they are not considering the fact that in some places on the earth ‘youth’ has become synonymous with ‘unemployment’. Croatia is the youngest EU member. A country that today also boasts a youth unemployment rate of more than 50%.

It is almost superfluous to explain the bad aspects of being unemployed, those are probably well known to many of us: living with parents, not having a chance to travel due to lack of money, not being able to experience things that are at the heart of European values.

Stuck in the iron cage of your golden country.

Since this is one of Croatia’s biggest issues, the government is trying hard to decrease unemployment among young people. As part of this plan the Ministry of Labour and Pension System passed a law on employment stimulation, so from now on every young person can have ‘vocational training for work without employment’.

What does vocational training for work without employment provide?

A one year paid internship which counts as work experience, paid transportation costs and the possibility of taking a state exam after the internship is completed, a requirement for admission to the civil service. Unfortunately, the pay is lower than minimum wage and once the internship is complete, there is no certainty of a permanent job or any job at all. In June this year the Ministry stated that the majority of interns are young people, 5,071 of them are aged 15-24 and 5,294 are aged 25-29. The latest sources say that 60% of interns found a “real job” after their internships.

When it comes to vocational training, the young people in Croatia are ambivalent. Some of them believe the training is a great opportunity to improve skills acquired while studying and also an experience to prepare young people for “real life”, while others think the training is an exploitation of cheap labour. Both, however, agree that these work opportunities are simply a smokescreen to hide huge unemployment rates.

“To be honest, I was only interning because I could not find a job for a long time after receiving my Master’s diploma. And I think it was a really great opportunity because it has provided me work in the profession. It is not stressful and you can still learn a lot.”

“I would not want to intern. The money you get is not enough for a normal life. You cannot call that a job. It is just a window dressing for the unemployment statistics. Besides, I think we are capable of earning more money in a shorter period by taking other opportunities.”

Even though there are many young interns in Croatia today, unemployment seems to be increasing. In April this year there were 355,598 jobless people. So, some fresh graduates are deciding to be part of the vocational training system and others are deciding to find different opportunities, such as working abroad or finding a seasonal job. Highly educated youth in Croatia are mostly stuck between two choices: to work in a badly-paid profession for a year or to try their luck searching for a job in another part of the world. Can we call that a choice at all or is it just a masquerade of liberty. I leave it to you to think about.