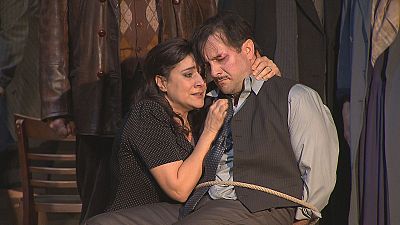 It tells the story of a Celtic priestess, Norma, who lives in Roman occupied Gaul. Norma is in love with Pollione, a Roman soldier, thus ostensibly her enemy. But, as in all romantic tragedies, Norma has a rival for her lover’s affections, Adalgisa.

This production is neo-realistic – moving away from 20th century versions where the performers showed little emotion.

Cecilia Bartoli says she deliberately went against that: “At that time, in the past, it was difficult to show human weakness, it was not allowed. This character is sometimes an icy woman. Her love for Pollione is not so obvious. In this scenic, new and neo-realistic vision, for the first time Norma is also a woman in love. So a passionate woman, a woman who loves, and yet is fragile. To show Norma’s fraility, is definitely a new vision of the role.”

Premiered at the Salzburg Whitsun Festival, this latest production is intended to be more like what the audience heard when it was first performed in 1831.

Norma is a mezzo-soprano, Adalgisa is soprano, the opposite of what had developed by the 20th century.

This version uses the musical instruments of Bellini’s times, which sound different to today’s.

All the material in the original score, including changes by the composer, has been used.

Within operatic circles, ‘Norma’ is known to be especially difficult, because there are at least two “original” Bellini versions, to which can be added many “corrections”.

Conductor Giovanni Antonini says sorting it all out was a tricky task: “Norma is particularly problematic, because the original manuscript by the composer was written very quickly, there are many corrections. Then there are lots of sources. The musicologist tries to figure out what is the most correct edition. That’s what we tried to do in this edition of Norma.”

Even then for the performers, it can be very taxing. Giovanni Antonini says it is physically exhausting, and this is why, in the past, productions have cut material.

“All of Bellini’s material we have, we play. In this production there are no cuts. In the past material was deleted because of fatigue, this music is tiring, it is difficult to sing. So even if you have strong voices, it is music that might need to be cut,” Antonini explained.

But, it is the music and voices that count. Ceclie Bartoli says this production is all about purity and originality: “We really tried to serve the score. And above all, we try to think of Bellini as a pre-Romantic composer, performing Bellini’s music, thinking more about Mozart than Puccini.”

It is neo-realistic and closer to the original performance style used during the composer’s life.

In this bonus video, Giovanni Antonini explains (in Italian) the details of the new production, explaining it is not just about using musical instruments from Bellini’s times.