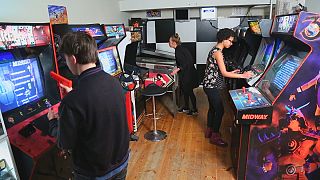 The games industry has come a long way since the 1980s.

From a niche market, it has grown into a global industry – with Hollywood-size budgets and plenty of creativity.

Students at the European Cross Media Academy (EUCROMA) in Copenhagen are hoping to become a part of it.

Amalie Naesby is studying to be an animation film director and recently discovered the potential of the games industry.

“I think that what has changed is that the game industry is a fairly new industry, compared to the film industry, so new traditions (can be) made,” she said.

“And the whole idea of more interactive stories that can be film and game combined is very interesting.”

The academy’s programme focuses on training animation students to work across both films and games.

It is the so-called cross media approach.

“As there weren’t really game directors before, I think this is a great opportunity for us to get out and influence the business by hopefully making good stories inside of the games,” said Amalie.

At first, some students were skeptical about the new way of working.

“When we started to have this format where they had to work with computer games, half of the students, the director students said we don’t want to,” said Gunnar Wille, founder of EUCROMA.

“Most of them changed their minds about it and they realised that this is a new media, a new way of telling stories that is interesting and it has a huge audience.”

You need various skills to do well in the industry.

Zoe Lorimer, 19, from Scotland, started out as a designer.

She is now becoming more interested in the production side of games.

“That’s because there is not a producer to handle the schedule and handle the budget. In the past that was handled by business people who did not have a good understanding of the games,” Lorimer continued.

“I just feel like we need more producers in the industry, especially as games get more and more complex.”

The idea behind the cross-media approach is that students consider different forms of media from the outset.

That was the spirit behind a game and animated film developed last year by academy students.

“What happens now is somebody makes a film and then they realised… we also have to have a game. And then they ask somebody could you make a game,” said Wille.

“Normally it would not be a good game because their love is for the film. What we say is that you have to think about this before you decide the media. Then you will have people that have the same interest and love for the game and for the film.”

This is the second year of a six month course supported by the EU media programme. Students come from all over the world.

Tamas Csetneki, 21, from Hungary, is an animator and concept artist. He likes films and games, but prefers the latter.

“I think that the game industry is more of an open minded part of the industry. They have more of a free hand to experiment with new ideas and new ideologies,” said Tamas.

What is the Media Programme?