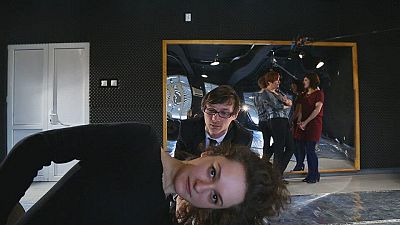 To succeed as an actor, you need talent. But that is not enough.

That is what Valeria Sitaru, a teacher at Bucharest’s University of Film and Theatre, tells her students every day.

“There are two important things (for an audition): on the one hand, the actor’s technique, his acting skills and on the other, the actor’s ability to deal with the world around him: Where is he going? What does he want to do? That’s up to him, you can’t teach that,” says Valeria.

We decide to speak to a young up-and-coming actress to find out how she gets ready for an audition.

Ada Condeescu is 26 years old. She has already played in two award-winning Romanian films, “If I want to whistle I whistle” and “Loverboy”.

“You have to be like a sponge, open to everything. You have to use your mind but also your instinct. Passing an audition is sometimes harder and more challenging than shooting a movie,” she says.

Ada has been selected to take part in this year’s Shooting Stars programme. Along with nine other young actors and actresses from different European countries, she gets to rub shoulders with the creme de la creme of cinema at the Berlin Film Festival. It is a chance for her to make a name for herself outside of her country.

But how do you make an impression on a casting director?

“I try and be very open and very honest, I don’t like to pretend. I’m always very natural,” says Ada.

Romanian Director and Producer Catalin Mitulescu chose Ada for his movie, “Loverboy”. He says there are many factors that come into play:

“The casting takes place downstairs, you sit on a chair, talking, there is a camera, but before, actors come here and drink coffee or tea… Some of my choices were made here, in the courtyard,” he tells us. “What I’m looking for is their own story, their own personality. I want to know what I can use, what we can use in the shooting,” he adds.

Let’s suppose you are the perfect actor for a part. How does a casting director find out about you?

Romanian actor Dragus Bucur realised the importance of networking after he took part in the Shooting Stars programme in 2010.

Backed by the EU’s Media Programme, Shooting Stars helped him find an agent in London, who got him parts in international productions.

“In Romania, you can work without an agent. But outside of Romania it is very difficult. So without Shooting Stars, no contacts. No contacts, no agent. No agent, no international career,” says Dragus.

Most European actors, like musicians and other artists, struggle to export their talent outside of their own country. European directors face the same challenge when it comes distributing their films abroad, even award-winning movies.

According to Ada, it is down to hard work and another key ingredient:

“As any actor, all over the world, you have to be very patient. Even if it will be very hard to reach the top, I think I will really enjoy this ride,” she tells us with a big smile.

Virtual Panel: how to become a successful actor