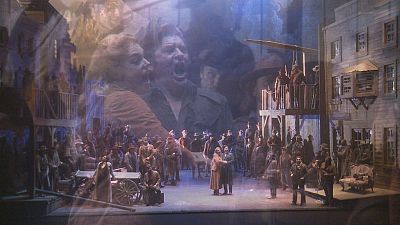 Monte Carlo’s Opera House has opened the season with one of Puccini’s less known but most complex works.

Rising opera star Meagan Miller, the American soprano, was in the lead role – her “Fanciulla” a successful combination of authority, romanticism and fortitude.

“She’s been living in this town with all these men, all of whom are in love with her, and somehow she’s been able to keep them feeling that way without ever having to kiss them – it’s interesting, she’s very clever, and she’s a survivor,” Meagan Miller told euronews.

Pinchas Steinberg said conducting this piece was a real challenge:

“Fanciulla is a very dangerous opera, I hear it from singers: ‘You know, Maestro, the orchestra is so loud, you never hear the voices’. The way Puccini wrote it – he wants the horns with the bells up to play fortississimo – of course I can do it but there’s no singer in the world who can come above that. So you have to know what he imagined and what you should do in reality,” he said.

“This is the first opera ever composed for the New York Metropolitan Opera. The year was 1910: at the time, everyone had someone in their family or among their friends who had taken part in the Gold Rush in the Far West. Puccini produced something completely new for the New World, he gave America its first national opera, a national drama brought to stage with music,” said Grinda.

The main character, Minnie, evolves throughout the opera: she falls in love with Ramerrez the bandit and is kissed for the first time. She feels cheated by him but then defends him with all her heart.

“There’s this kind of largeness and ‘expansiveness’ in the character that fits me really well,” the soprano told us.

“The fact that when I was about five or six I told everyone I was going to be the president… I had that kind of grandiose dream-world from the beginning!

“She observes people so well, she knows that Jack Rance, the sheriff, cannot resist a poker game, and she uses that to wrap him around her finger. And she cheats too, she doesn’t care, she’s going to do whatever she’s got to do to survive, and there’s something about that in me too – not the cheating part,” Miller added with a smile.

According to Pinchas Steinberg, this work by Puccini is totally underrated.

“The orchestra is really ‘protagonista’, and Puccini himself said: ‘I’m tired already of the Butterflys, and Toscas and the Bohèmes, I’m taking a different way’”. It’s a symphonic piece, really, with voices, and in my personal opinion, this is Puccini’s masterpiece,” the conductor told us.

For more excerpts (in French) of our interview with opera house director Jean-Louis Grinda, please click on the following link:
http://fr.euronews.com/2012/12/13/interview-bonus-jean-louis-grinda