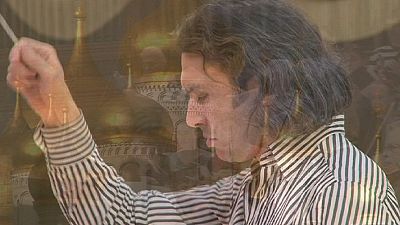 In Moscow for one month from late March, the Rostropovich Festival takes place. It was founded in honour of the celebrated Russian cellist who died five years ago.

It is within the framework of this critically acclaimed event that a special night was recently devoted to the great Russian composer, Sergei Prokofiev.

The London Philharmonic Orchestra was playing under the baton of its principal conductor Vladimir Jurowski, who like many great artists such as Prokofiev himself, is a citizen of the world. Speaking to euronews on the nomadic life that musicians lead he said:
“Don’t forget we are musicians and musicians are gypsies. I was born and raised in Russia but I have Jewish blood, so my ancestors came from somewhere else, they had to adapt. Then I left my country at 18 and I had to adapt to German conditions.
“Then I worked a lot in the United States, the UK, Italy and France. So wherever I go I try to adapt to the ways of people in the countries I work, but of course without losing my own individual self. So I feel I am still what I’ve always been a Russian musician with a Soviet upbringing… and I’m OK with it!”

Like Jurowski, and Rostropovich himself, Prokofiev also spent a long time living abroad. Once back in the USSR in the early 1930s, his relationship with the Soviet regime was controversial and sometimes painful.
At times praised and honoured, he later fell into disgrace with the authorities and was eventually marginalised at the end of his life, but today his music is among the most played the world over. Although, as Vladimir Jurowski explains, many find it difficult to understand the composer’s complex character:

“Prokofiev is still an enigma to a lot of people. [He] is a mixture of incredible life energy and a hidden sting. In this very sunny creature there was a demonic side, a very menacing side, a slightly irrational side. So in a way he was very Russian in that respect, although he always pretended he was an absolute westerner in everything he did.

“Prokofiev described the different parts of the Twentieth Century’s psyche and its Zeitgeist – he was certainly a child of his time. I think it’s fair to say that the history of the last century should be studied with Prokofiev’s scores at hand.”

In the video accompanying this story you hear segments of Sergei Prokofiev’s cantata “Ivan the Terrible.”