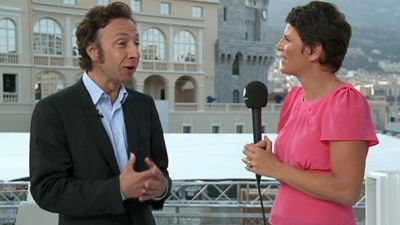 He is a long-time friend of Prince Albert:

“For me, of course, this wedding is hugely important. I’ve been friends with Prince Albert for 25 years, and so I will be part of the wedding of someone I love and respect as I commentate on it.

So, of course, there is a level of personal commitment. It’s also a page of contemporary history that’s being written for the people of Monaco, where the Grimaldi family has ruled since 1297. This wedding is a promise of hope for the future, it means there will be a legitimate heir, who will be able to guarantee the privileges of the Monegasque people. It will be both a formal, historic event, and a warm family affair.”

euronews: “People say they are quite a rock’n roll couple.”

Stéphane Bern: “They are rock’n roll. In fact I can tell you something: after the ball, we will get rid of the philarmonic orchestra and turn up the sound, and it’s gonna be really rock’n‘roll.”

euronews: “Are they a dream-couple like William and Kate?”

Stéphane Bern: “Listen, I don’t know, it’s not a competition about who inspires people most. What’s certain is that he’s a head of state, a sovereign prince, so the magic moment will be when all these powerful people from all over the world will turn up on the Place du Palais and enter the court of honour, which will turn into an open-air cathedral.”

euronews: “Stéphane, you say you have known the Prince for 25 years. He is 53, that means he has waited 53 years to find his princess. What’s so special about Charlene?”

Stéphane Bern: “I’ll tell you what’s special about Charlene Wittstock: She’s a natural, she’s spontaneous, she’s very straightforward, and she’s got nerves of steel. She’s a high-level athlete, who is dedicated, and who has this very strong mind, who is able to take on challenges without worrying about rumours and small-talk.”

euronews: “Does she represent a fresh start for Monaco?”

Stéphane Bern: “Yes, something like this is always a new beginning. But what’s important is that there hasn’t been a princely wedding here for 55 years, so it’s a truly historic event. And most of all, this is a happy event, which will give the principality an economic boost, because the country is full, all the hotels are booked up, Monaco has the lowest unemployment rate in Europe. But also, for the people of Monaco, it’s a happy moment which they want to share in all simplicity by showing their love for their prince.”

euronews: “A people’s party which you will commentating live, Stephane. Thank you very much for this interview.”