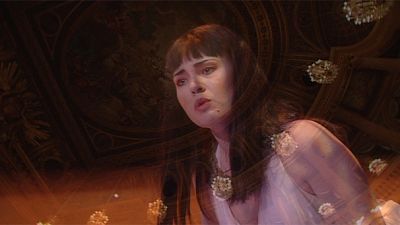 ‘Julius Caesar’, Handel’s masterpiece, has been pulling in the crowds in the extraordinary setting of the ‘Opéra Royal’ in Versailles.

Despite its title, it is Cleopatra who is actually the main character. In this production the role is sung by Bulgarian soprano Sonya Yoncheva, the latest winner of Operalia, the most famous opera contest in the world.

What is Sonya’s take on the Queen of Egypt?

“She is the real representation of what a woman is all about. She is very intelligent, she has to decide straightaway what to do and which of her weapons as a woman and politician, to use. She’s seductive, she sets up a ‘theatre’, and she acts, especially for Caesar, and then falls in love with him, and I love that! Then it gets so dramatic, because: ‘my god, I will lose everything, my palace, my power, my Caesar, we’re all going to die!’… but in the end it’s victory!”

Sonya Yoncheva has a first class pedigree: she is a graduate in piano and voice, has won several international competitions and has had the privilege to work with top artists such as William Christie and Placido Domingo.

Luck however played its part at the beginning of her career.

“When I became a teenager I started to be more ‘womanly’, and somebody told me: ‘you have a nice face, and you speak a lot – I will hire you for my television!’. That’s how I started in television.”

Singing, however, appears to make many more demands.

“At the moment I have to be very serious and I have to take decisions as Cleopatra does, although it’s much simpler to be a singer than a queen of Egypt! It comes very naturally to me, in any case, I love to be on stage, and I like to be in this kind of life, I feel comfortable there.”

Does Yoncheva see herself staying in an operatic register?

“I like to sing in different ways, sing Baroque or jazz, which I love that, or the Bel Canto – that is now the new ‘colour’ of my career. I will go into both, let’s see what happens… To be continued!”

In this edition of “Musica” you can hear extracts from George Frederick Handel’s ‘Julius Caesar’.