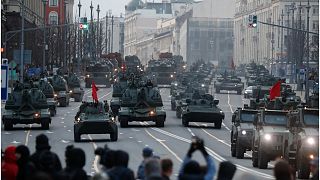 On Thursday evening, the centre of Moscow was filled with a wide array of military vehicles, which were seen driving towards Red Square for the first-night training of for the traditional Victory Day parade, which will be held on May 9 to mark the 77th anniversary of the official capitulation of Nazi Germany to the Soviet Union. Hundreds of people reportedly took to the streets to observe the hardware.

According to the Russian Defense Ministry, the foot column will comprise 33 parade units numbering over 10,000 personnel. The mechanized column will feature 131 weapon systems.