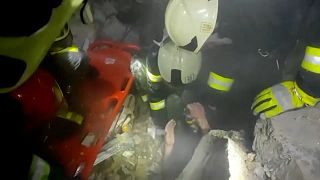 Ukrainian emergency services say four people were killed by shelling not far from the center of Kyiv on Sunday.

Loud explosions were heard as a shopping center and cars in a parking lot caught fire, they said.

Russian troops have been shelling Kyiv for a fourth week now and are trying to surround the capital, which had nearly three million people before the war.