Ukraine's parliament has approved a nationwide state of emergency to come into force at midnight on Wednesday into Thursday. The move was proposed earlier by President Zelenskyy and backed by the National Security Council.

The Kremlin said on Wednesday night that rebel leaders in eastern Ukraine have asked Russia for military help to fend off Ukrainian "aggression". Washington called it a classic "false flag" operation designed to provoke a pretext for Moscow to invade.

It comes as the region braced for further confrontation after Vladimir Putin received authorisation to use military force in eastern Ukraine and the West responded with sanctions. An emergency EU summit of the bloc's 27 national leaders is to convene on Thursday night in Brussels.

The United Nations Secretary General Antonio Guterres told the UN General Assembly on Wednesday that the "world is facing a moment of peril", as he again accused Russia of violating the UN charter.

Ukraine's Foreign Minister Dmytro Kuleba called for an immediate "severe, swift and decisive response" against Moscow, warning that failure would "mean a total bankruptcy of the international security system and international institutions".

Kyiv has announced a call-up of reservists and warned its nationals in Russia to leave the country.

The Russian ambassador to the UN hit back, Vasily Nebenzya telling the assembly that Ukraine was to blame for waging war on its own citizens. Earlier, a close ally of President Putin in the Russian parliament, the Duma, described new EU sanctions as "worthless".

The key points to know

22:51
That's the end of our live blog coverage tonight. Join us again from 0600 CET on Thursday for more updates. See below for a list of all Wednesday's developments.
22:44

The White House says the request by Ukrainian separatists for Russian military assistance in the face of supposed “aggression” by Ukraine’s government is an example of the “false flag” operations the West has consistently warned against.

The U.S. and allies have alleged for weeks that Russia would try to create a pretext for an invasion of Ukraine through the use of such operations.

White House press secretary Jen Psaki says the Kremlin’s announcement Wednesday that the separatists are seeking help ”is an example” of such an operation.

Psaki adds that “we’ll continue to call out what we see as false flag operations or efforts to spread misinformation about what the actual status is on the ground.”

The Kremlin says that the rebel leaders in eastern Ukraine have asked Russia for military assistance to fend off the Ukrainian “aggression.”

The appeal raises the prospect of Russia’s direct military involvement in eastern Ukraine amid Western fears that Moscow is poised to launch an all-out invasion of its neighbor.

Kremlin spokesman Dmitry Peskov said the rebel chiefs wrote to Russian President Vladimir Putin to tell him that shelling by the Ukrainian military has caused civilian deaths and forced many people to flee.

The move comes after Putin recognized the independence of Russia-backed rebel regions in eastern Ukraine and signed friendship treaties with them. On Tuesday, lawmakers gave Putin permission to use military forces outside the country.

Austria, Belgium and the Netherlands moved to summon the Russian ambassadors to their countries on Wednesday, to explain Moscow's actions.
The Austrian foreign affairs ministry said Vienna "strongly condemns" Russia's "serious violation of Ukraine's sovereignty and territorial integrity".
Belgium's Foreign Minister Sophie Wilmès accused Russia of making "the deliberate choice of violating international law, the Minsk accords and of attacking Ukraine's sovereignty and territorial integrity".
The Dutch foreign ministry said it had made clear to the Russian ambassador that "the recent actions by Russia are unacceptable and... will have serious consequences".
On Tuesday, ex-EU member the UK also summoned the Russian ambassador to London.
21:48

As we reported earlier, the Hotel de Ville in Paris and the Brandenburg Gate in Berlin have been lit up in Ukraine's colours on Wednesday night in a show of solidarity by the French and German capitals. Here they are: 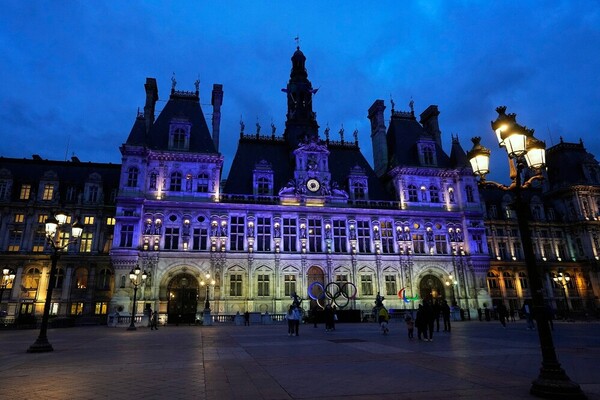 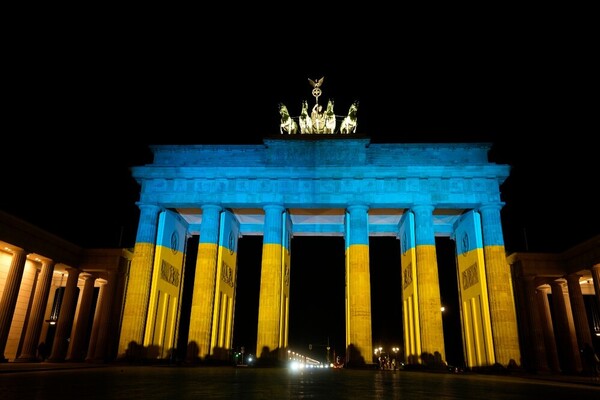 A senior US defence official in Washington said the Russian forces arrayed along Ukraine’s borders are “as ready as they can be” for an invasion, with about 80% in what the US considers "forward positions, ready to go” within 5 kilometres to 50 kilometres of the border.
Read more here: 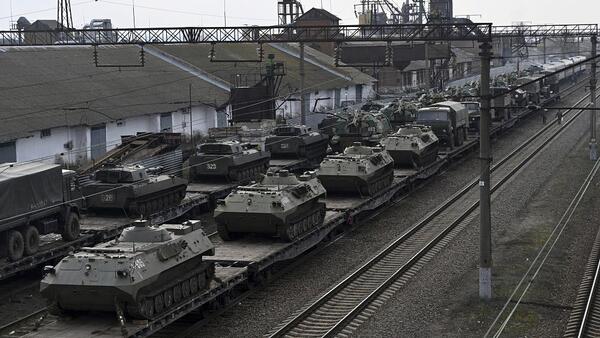 The warning comes as the region braces for further confrontation after Vladimir Putin received authorisation to use military force outside his country and the West responded with sanctions.
21:16

Lawmakers in Ukraine have approved a nationwide state of emergency amid fears of an all-out Russian invasion.

The parliament approved Ukrainian President Volodymyr Zelenskyy’s decree that imposes the measure for 30 days starting Thursday. The state of emergency allows authorities to impose restrictions on movement, block rallies and ban political parties and organizations “in the interests of national security and public order.”

A total of 335 lawmakers voted in favour of the measure, which comes into force at midnight. The move was proposed earlier by President Volodymyr Zelenskyy and backed by the National Security Council. 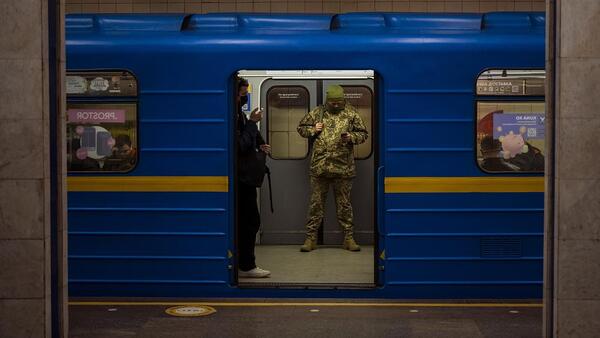 euronewsUkraine's parliament has approved a state of emergency to come into force at midnight on Wednesday into Thursday, after Russian President Vladimir Putin said he would send troops to eastern Ukraine.
20:47

US President Joe Biden announced sanctions on Wednesday against the company responsible for operating the Nord Stream 2 gas pipeline, linking Russia to Germany, a new measure in response to Vladimir Putin's manoeuvres around Ukraine.
"Today, I have directed my administration to impose sanctions on Nord Stream 2 AG and its corporate officers," Biden said in a statement.
"These steps are another piece of our initial tranche of sanctions in response to Russia’s actions in Ukraine. As I have made clear, we will not hesitate to take further steps if Russia continues to escalate."
The announcement comes after Germany announced on Tuesday that it was suspending the controversial gas pipeline, which was completed at the end of 2021, but had not yet been commissioned, pending certification from Berlin.
The United States has been against the gas pipeline from the start, which would weaken Ukraine economically and strategically and, in their eyes, increase the EU's dependence on Russian gas.
"I want to thank Chancellor Scholz for his close partnership and continued dedication to holding Russia accountable for its actions," Biden said.
19:50

A new cyberattack on Wednesday targeted several official Ukrainian websites that had been made inaccessible, a senior government official said.
Deputy Prime Minister Mykhailo Fyodorov said the attack began in the late afternoon, disrupting the operation of the websites of several banks and ministries in the country.
The home pages of the sites of the Ministry of Foreign Affairs and that of the Cabinet of Ministers were thus inaccessible, noted AFP journalists.
The sites concerned succeeded in "redirecting the traffic to another access provider to minimize the damage", Fiodorov said.
The origin of the attack was not specified.
In January, Ukraine was already targeted by a major cyberattack against a number of government sites. The authorities then claimed to have evidence of Russian involvement, accusations denied by Moscow.

US Secretary of State Antony Blinken announced that a meeting with his Russian counterpart, Sergei Lavrov, scheduled on 24 February has been cancelled, arguing Moscow is not serious about diplomacy.

It comes after the US, UK, and EU unveiled sanctions against Russian individuals and entities in response to Putin's recognition of the so-called Donetsk People's Republic and Luhansk People's Republic — two separatist-held areas in eastern Ukraine — and his announcement that troops would be sent in on "peacekeeping duties."