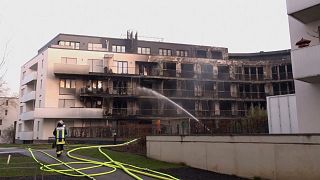 A huge fire broke out at a residential complex in the western German city of Essen early on Monday.

The fire service said about 100 people were evacuated from the complex, roughly the number of people who lived there, news agency dpa reported.

He said he was "cautiously optimistic" that all residents had been evacuated in time.

About 150 firefighters were dispatched to fight the blaze.

The cause wasn't immediately clear, but the fire appeared to have spread quickly after it broke out in the early hours, fuelled by gusts from the latest of a series of storms that have hit northern Europe in recent days.