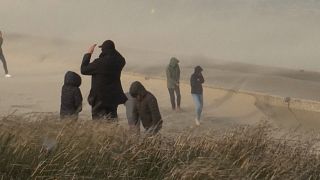 Storm Eunice is set to hit Belgium hard on Friday, with part of the country bracing itself with a second highest code-orange weather warning.

In two provinces, train services will be suspended for the afternoon and slowed down on other lines.

Many schools decided to stop classes at noon so that students could get home before the worst winds hit.

In the Netherlands, some still wander out to the beach at The Hague. The strong winds have blown off the roof of the ADO Den Haag stadium, as well as roof tiles from buildings.

The storm is expected to be the worst in several decades.