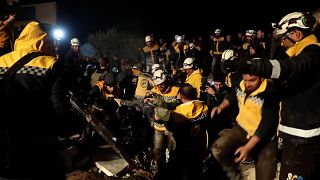 Rescue after building collapse in Idlib

A building collapse in northwestern Syria killed a woman and three of her children, while her husband and three other children survived, according to the opposition group Syrian Civil Defense.

The mother and one of her children were already dead when rescuers pulled them out, while two children succumbed to their injuries soon after, the civil defence said.

Later that night, the father and three other children were pulled out alive and taken to the hospital for treatment.