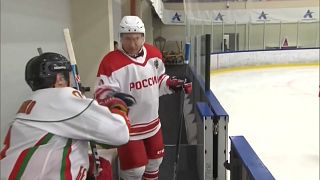 Russian President Vladimir Putin and his Belarusian counterpart Alexander Lukashenko play ice hockey after holding diplomatic talks. Both presidents play on the same team, with Putin taking to the ice as number 11 and Lukashenko as number 1. The son of the Belarusian president Nikolai Lukashenko also joins them. The match takes place on the ice arena of the Manezh children's and youth sports school in Strelna, near St. Petersburg. Some famous Russian hockey players including Vyacheslav Fetisov, Valeri Kamensky, Alexei Kasatonov, take part in the match as well.