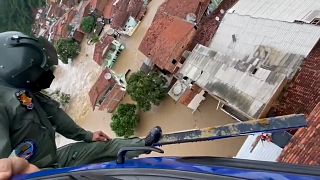 The Bahia state government's press office said heavy rains have caused floods that have killed 18 people and affected at least 50 cities since early November. It said more than 16.000 people are homeless, 19,500 displaced and two people missing as a result of the flooding.