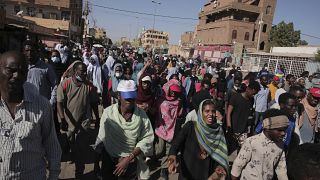 Demonstrators in the capital, Khartoum, chanted "the people want the downfall of the regime" while in the capital's twin city Omdurman others shouted "power to the people, a civilian government is the people's choice".

Security forces fired tear gas to disperse protesters in Omdurman as well as in the central state of North Kordofan and in North Darfur, witnesses said.

General Abdel Fattah al-Burhan seized power and detained Prime Minister Abdalla Hamdok on October 25, but after international condemnation and mass protests he reinstated the premier in a deal they signed on Sunday.

Protest organisers have dubbed Thursday as "Martyr's day", to pay tribute to the 42 people killed, according to medics, in the deadly crackdown against anti-coup demonstrators.