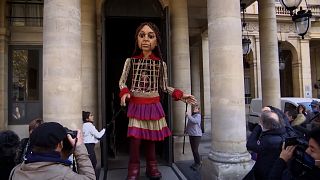 A giant puppet, representing a Syrian girl, meandered through the leafy gardens of the Palais Royal in Paris on Thursday to raise awareness of the plight of migrants.

The puppet, manned by a crew of performers, has been ''walking'' around various cities whilst on a journey to reach the UK, starting from Gaziantep, a city on the Turkish-Syrian border.

On Thursday "Amal" visited Paris and the famed Comédie Française and shared the stage with one of the company's actors for a short improvised sketch.

According to Lan, the art project's aim was to promote a simple message regarding refugees: "Don't forget about us."

According to organizers the puppet is meant to represent the millions of migrant children traveling across the globe.

So far, "Amal" has crossed Turkey, Greece, Italy, France and continues towards the final destination in Manchester, England.