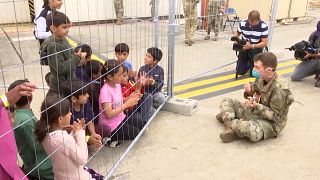 US Germany base transformed in evacuee hub

Child evacuees from Afghanistan were on Tuesday entertained by U.S. soldiers at an air base in Germany where they are currently being hosted.

Children could be seen listening to a soldier playing the ukulele at Ramstein Air Base near Frankfurt. Others played in front of a large hangar usually used to store aircraft.

Lt. Col. Simon Ritchie, head of a medical unit on the air base, said lots of the people on the base were suffering from heat injuries as well as injuries sustained at the airport in Afghanistan.

The base also saw a special new arrival recently, as a woman gave birth after her plane landed there on Sunday morning, according to news reports.

Over 10,000 people are temporarily living in tents and hangars at the air base before continuing their journeys elsewhere.