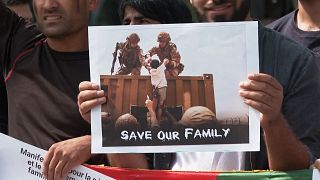 Hundreds rally in Paris in support of Afghan people

Reza Jafari, head of the association Children of Afghanistan and Elsewhere and organiser of Sunday's event, told the protesters: "A humanitarian catastrophe is unfolding. We must prevent it now, open humanitarian corridors so that people who want to leave can leave."

Organisers demanded a meeting with French Foreign Minister Jean Yves Le Drian, who told the Journal du Dimanche that the cases of hundreds of Afghans who are seeking to leave will be reviewed.

The French army has airlifted about 600 mainly Afghanis on five flights out of Kabul in the week since the collapse of the Afghan government. A sixth flight is expected late on Sunday.