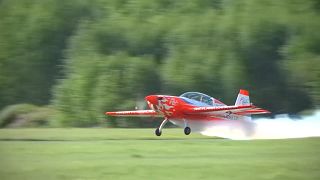 One of Russia's most decorated female aerobatic pilots took to the skies on Saturday during an air show in Moscow.

Svetlana Kapanina, 52, performed at the "Sky – Theory and Practice" festival.

The event featured aerobatics teams, vintage aircraft and helicopters - and a competition for homemade aircraft.

Before her flight, Kapanina said that there were fewer female pilots currently in Russia than there were during the Soviet era, but that enthusiasm for the sport amongst women was growing.

Organisers expect at attract around 30,000 spectators over the two days.