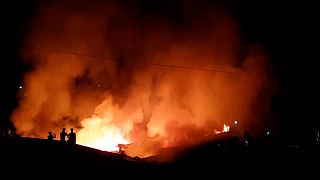 Fire in market near Rohingya camp in Bangladesh

A fire on Friday destroyed more than 20 shops in a makeshift market near a Rohingya refugee camp in southern Bangladesh, killing at least three people, police and witnesses said.

Local officials said they recovered the bodies from the debris after it took firefighters several hours to bring the blaze under control.

The fire broke out early Friday when residents of the sprawling Kutupalong camp for Myanmar's Rohingya refugees were asleep.

Firefighters struggled for more than three hours to take the fire under control.

It was not clear how the fire began.

Bangladesh has sheltered more than a million Rohingya Muslims, the vast majority having fled Myanmar in 2017 in a major crackdown by that country’s military.