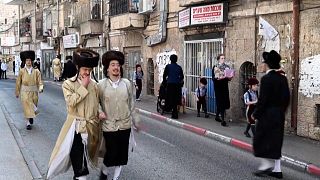 Dozens of ultra-Orthodox Jews marking the Purim holiday threw stones at police in Jerusalem on Sunday, as tensions persisted between authorities and the deeply-religious community that has been accused of repeatedly flouting coronavirus restrictions.

"Police commissioner Yaakov Shabtai" was written on one effigy.

Some residents shouted "Nazis" at the officers, one AFP reporter said, while others threw liquid-filled bottles as well as rocks.

Ultra-Orthodox Jews, known in Israel as Haredim, have in recent months clashed repeatedly with police enforcing coronavirus restrictions on gatherings.