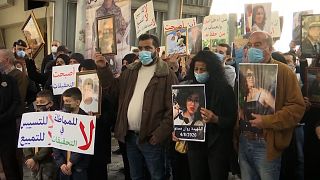 Six months on from the huge port blast in Beirut, Lebanon, and family of the victims have been demanding justice.

Half a year after the blast and the domestic investigation into how it happened has been brought to a virtual halt by the same political and confessional rivalries that thwarted past attempts to uncover the truth in major crimes.

The ministers challenged the judge and asked Lebanon’s highest court to replace him in a move that brought the probe to a halt since December 17.

A court ruled Sawwan can resume his investigation in early January, but he has so far failed to do so, raising concerns among victims’ families that he may have caved to pressure.

Human Rights Watch (HRW) said Sawwan’s appointment process was opaque and the investigation itself, so far secret, has been tainted with political interference.