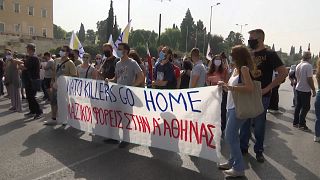 The protesters held up banners bearing messages such as "NATO killers are going home."

They marched in front of the parliament building before peacefully ending the rally.

Stoltenberg was in Athens on a one-day visit and met with Greek Prime Minister Kyriakos Mitsotakis.

The two discussed recent tensions in the eastern Mediterranean where Greece and Turkey are in a dispute over maritime borders.