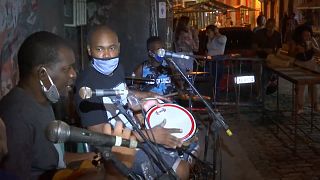 Dozens took to the streets of Rio de Janeiro on Monday night to dance and sing at an impromptu yet authorised street party.

It comes just weeks after authorities announced that next year's Carnival celebrations will be canceled or postponed until further notice.

Much of Carnival is celebrated in neighbourhoods however, with dozens of street parties that can bring thousands of people to celebrate, dance and party.

Those types of events are difficult to control and could challenge attempts by city officials to limit such activities due to COVID-19.

Brazil has the world's third largest case-load after India and the US, with some 4.9 million infections and over 146,000 deaths.