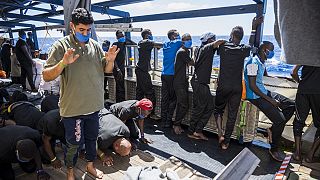 The only humanitarian ship currently cruising the distress zone off Libya, the Sea Watch 4 carried out its third rescue on Monday August 24 in less than 48 hours. Around 100 people were rescued and brought on board despite the deterioration of weather conditions in the Mediterranean sea, with waves of more than two metres.

The two previous rescues took place on August 22 and 23 in the same area, off the Libyan coast. The first helped seven people in difficulty on a fiberglass boat, while for the second, a few hours later, 97 people crammed into an inflatable boat were rescued, including several dozen minors. .

According to Barbara Deck, medical coordinator of Médecins sans frontières (MSF), aboard the Sea Watch 4, the last survivors who arrived were particularly "weak and disoriented", also smelling strongly of gasoline and showing symptoms of inhalation of fuel.

The MSF medical team on board continues to monitor the progress of the burns, while also following more than 30 patients with acute hypothermia.