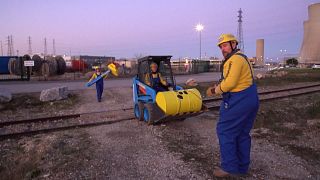 Campaigners broke into a nuclear power plant in southern France to call for it to be shut down.

It comes as France is set to close down one of the reactors at the country's oldest nuclear facility, Fessenheim, on Friday evening or Saturday morning.

France has scores of nuclear plants and derives close to 75 per cent of its electricity from the energy source.

But there are plans to shut down 14 of France's nuclear reactors by 2035, starting with two at Fessenheim, on the border with Germany.