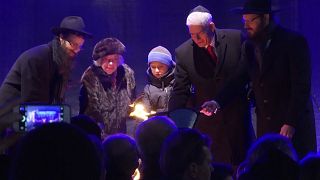 Berlin's Jewish community on Sunday celebrated the start of Hannukah, the Festival of Lights.

A crowd of several hundred gathered in front of Brandenburg Gate to mark the official start at sunset.

They witnessed their rabbi and the president of the Central Council of Jews light the first branch of a giant menorah.

The 10-metre (33 feet) tall structure is believed the largest menorah (also Chanukah or hanukkiah) in Europe.

It commemorates a victory by outnumbered Jewish forces over Syrian occupation and the reclaiming of the second Temple of Jerusalem in the second century BC.

According to Jewish belief, a small amount of oil found in the destroyed temple miraculously kept its menorah alight for eight days.

Tradition calls for the daily lighting of a candle in the evening throughout the eight days; one flame the first night, the second on the second night and so on until the eighth evening, or Hanukkah, when all candles are lit.