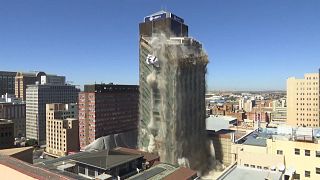 A tower in Johannesburg that stood at 108 metres tall was demolished on November 24, sending a massive cloud of rubble into the air.

The former Bank of Lisbon tower imploded on itself in a controlled demolition.

"It was the second-largest building to be demolished. It is standing at 108 metres, the tallest building ever to be demolished was at 114 metres," said Tasneem Motara, Gauteng Member of the Executive Council for Infrastructure and Property Development.

Experts involved said "this was probably one of the most difficult demolitions" they have worked on, said Motara.

"It was completely successful," she added.

The Gauteng provincial government decided to demolish the tower after a structural assessment on the building was conducted, following the fatal fire in September 2018.

According to Motara, the new building that will be constructed in place of the tower will house a provincial government department.