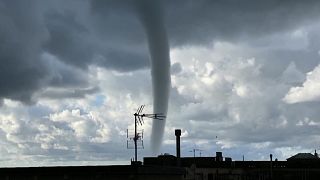 Waterspouts swirled through dark skies above Genoa on Thursday.

They formed above the water of the Ligurian Sea with the ominous northern Italian cityscape as the backdrop.

President of the Liguria Region, Giovanni Totti, said via Twitter that a fireworks displays set for the Piazza de Ferrari would be postponed due to the weather.

Fair weather waterspouts usually form along the dark flat base of a line of developing cumulus clouds.

This type of waterspout is generally not associated with thunderstorms, according to the National Oceanic Atmosphere Administration.