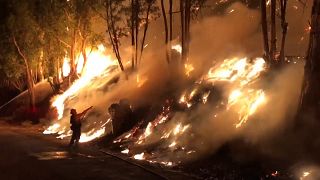 Hundreds of firefighters have been scrambled to tackle a new wildfire in southern California.

Authorities in Ventura County ordered evacuations for about 7,500 people in an area that includes roughly 1,800 buildings.

The fire grew in only a few hours to around 7,400 acres — just over 11 square miles (28 square kilometres) — before midnight.

Meanwhile, Ventura County Sheriff Bill Ayub said a small drone that appeared to be "looking at photography of the fire" interfered with aerial firefighting efforts Thursday.