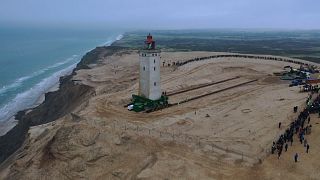 Danish lighthouse moved to save it from coastal erosion

One of the Danish west coast's major tourist attractions, Rubjerg Knude Fyr, is being relocated.

As a result of coastal erosion and shifting sands, the lighthouse is only a few metres from the edge of a slope above the water.

The move has been planned for a year and a half, and for the past ten weeks, engineers have worked hard preparing the move of the 1,000-tonne heavy tower in one piece. Moving is done on a rail system like rollerblades.

The move went very smoothly at a top speed of 12 metres per hour. Just before 13h GMT (15h CEST), the lighthouse arrived at its a new location.

It has been there, in the same spot, in 120 years – but over time the ocean has moved closer to the lighthouse – so close that the lighthouse is in danger of collapse.

Therefore, the 1,000-tonne lighthouse will be moved today – 70 metres into the country from the shore, with help from hydraulic jacks and tailor-made rollerblades.