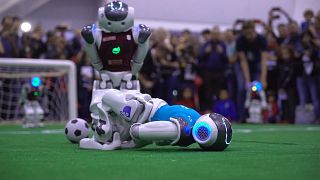 A big football match is about to kick off at Rome's 'Maker Faire 2019'.

These humanoids called Nao, version 6, are competing for the Robocup.

They are part of an initiative aimed at creating robots intelligent and strong enough to win against the victorious side in a human football World Cup by the middle of the century.

Today, the humanoids are equipped with movement sensors and a global positioning system (GPS) to track their position on the field.

Makers from more than 40 countries fill seven pavilions in a dizzying array of innovation.

Some imagine the future of humanity imbued in artificial intelligence. Others pitch solutions for leaving planet Earth.

Braga stripped it of its front wood panel and wired it to A- Mint: the first ever artificial intelligence that can decode any musical improvisation style in real time, without the use of databases.

It can orchestrate with different instruments and build an endless overlaying of tunes.

Inside the "Re-Think" pavilion, hydroponic farming, which needs no soil and little water, offers a solution to farming in harsh climates.

A way to give astronauts their daily greens, or provide produce for a new colony of humans on another planet.

Produce innovator Renato Reggiani is preparing to farm on Mars.

His food-tech startup Biopic uses photosynthesis lamps to grow produce of all kinds.

He uses a specific wavelength that can modify the genetic expression of the plant, to make them richer in antioxidants, taller or tastier.

The Maker Faire has opened its doors to cutting-edge artists for the first time this year.

Artist Joaquin Fargas from Argentina has created artwork as a commentary on climate change. Together with the designer Elia Gasparolo, they created two solar-powered art installations called the Glaciator and the Rabdomante. The Glaciator is designed to compact and crystallise snow under its feet. Rabdomante collects water from dry atmosphere.

This year marks the Maker Faire's 7th edition in Rome. More than 100-thousand visitors attended the three-day event, according to organisers.