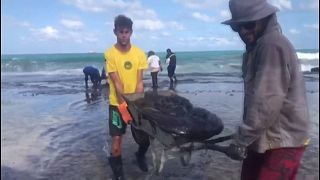 The thick petroleum sludge that has been mysteriously washing up on beaches in Brazil for more than a month struck the popular tourist spot of Porto de Galinhas in Pernambuco state on Saturday (October 19).

Usually known for its beautiful sand, palm trees and pristine tidal pools, the resort area was sullied by an oily sludge and locals scrambled to clean up the mess.

Reports of the oil spill emerged late last month. Brazil's environmental agency Ibama has reported that an analysis of a vast oil spill along the country's northeastern beaches showed the spilled crude did not originate in the country.