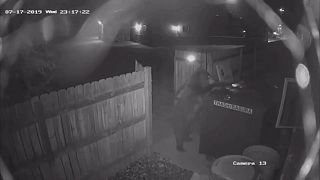 A surveillance camera filmed a bear attempting to take and open a trash bin at a Colorado marijuana dispensary.

The Daily Camera reports that Colorado Parks and Wildlife Northeast Region posted the video on its Twitter account Tuesday.

Agency spokesman Jason Clay says the bear was captured on video at The Bud Depot in Lyons just before midnight on July 17.

The video shows the bear pulling the large metal trash bin out of an enclosed area and unsuccessfully attempting to open its top lid in the town 44 miles (71 kilometres) northwest of Denver.