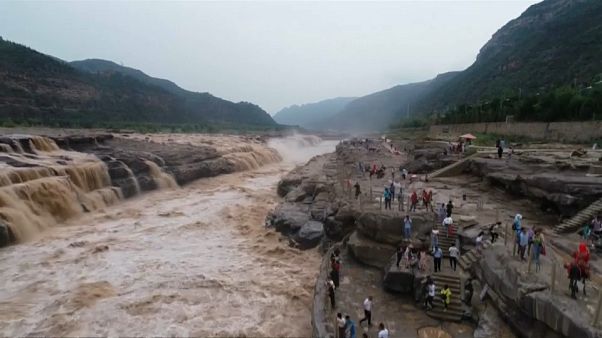 One of the largest waterfalls in China, the Yellow River's Hukou Waterfall, is wowing visitors amid its best-viewing period.

"It's the first time for me to be here to see the Hukou Waterfall. I'm feeling very excited. It is magnificent and it is our mother river. I like it," said Chen Xiaoyin, a tourist from south China's Guangdong Province.

Another visitor from the same place said that he felt a power that is so overwhelming and unrivalled.

The Hukou Waterfall sits on the intersection of north China's Shanxi Province and northwestern Shaanxi Province. It is the largest waterfall on the Yellow River, the second-largest in China.

Its name, which means "mouth of a teapot" in Chinese, derives from its resemblance to water pouring out just like gushing out from a huge teapot.