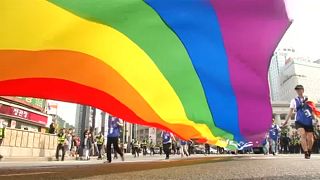 They demanded better equality in the country after Taiwan last month became the first Asian country to legalise same-sex marriage.

Homosexuality is not illegal in South Korea but the Seoul Western District Court dismissed a bid to allow same-sex marriage in 2016.

Meanwhile, across the street, hundreds of anti-LGBT protesters, mostly from churches, staged a rally and chanted slogans such as "No same-sex marriage" and "Homosexuality is a sin".