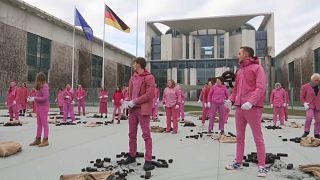 Greenpeace activists on Thursday demonstrated outside the offices of German Chancellor Angela Merkel, as a way to urge politicians to quickly implement the country's coal commission report.

The report recommends that Germany stops burning coal to generate electricity by 2038, as part of efforts to tackle climate change.

Dressed in pink, the activists carried sacks of coal to the Chancellery, where the report was handed to Merkel later on Thursday.

Greenpeace, which wants all coal plants shut down by 2030, has welcomed the fact that Germany finally has developed a timetable to phase out of coal.