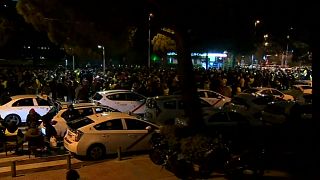 Hundreds of taxi drivers protested outside one of Spain's largest tourism fairs on Wednesday, using their vehicles to block access roads and burning bins as part of an open-ended strike against ride-hailing services such as Uber.

Riot police blocked access to the venue where the Fitur fair was being held, as protesting drivers chanted: "We will stop Fitur."

Madrid taxi drivers have been on an open-ended strike since Monday to protest ride-hailing services, which they say are ignoring regulation and pose unfair competition