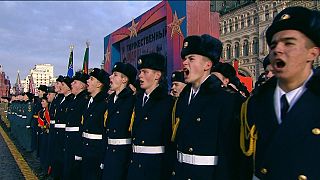 Russian servicemen dressed in historical uniforms marched through Moscow's Red Square on Wednesday (November 7) to mark the 77th anniversary of the 1941 parade when Soviet soldiers headed to the front lines of World War Two.

In 1941, a 15-minute parade was held in the besieged Soviet capital to mark the 24th anniversary of 1917's October Revolution.

The event served to demonstrate the Russian army's resilience to German forces, as the troops that paraded past the Kremlin then headed directly to the front line, where many of them died in Battle of Moscow incidents.

Russia continues to follow the tradition of holding a 7th November military parade, commemorating and paying respect to the veterans who went to war 77 years ago.