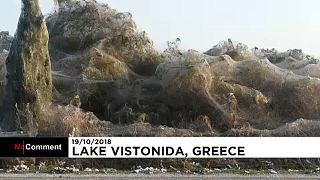 Spiders have been keeping busy at Lake Vistonida in north-eastern Greece. Over the last few days, large webs spreading for hundreds of meters across the lake's coastline, have blanketed the entire landscape. The trees and shrubs have been completely wrapped in spooky grey webs.

The lake is located near the Vatopedi Monastery in the settlement of Porto Lagos, in the region of Xanthi.

Experts say it is a natural phenomenon that occurs when very high temperatures and humidity in the region cause an increase in the reproduction of insects such as gnats, which are a popular source of food for spiders, thus drawing several of the crawlers to occupy the area. Insects were seen trapped in the webs as the spiders were busily weaving.

A similar phenomenon was witnessed on a coastline in the town of Aitoliko, in western Greece, last month.