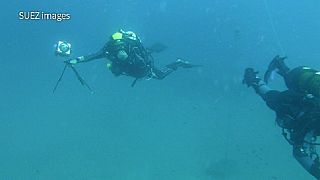 A diving team have been fishing out hundreds of tyres about 500 metres off an exclusive coastline between the French towns of Cannes and Antibes.

What seemed a like an irrational idea turned out to be just that: a 1980s experiment that saw 25,000 car tyres added to the Mediterranean to create a sanctuary for sealife is being cleaned up after it was found to be toxic.

The original idea was that the tyres would become populated by coral and other sea creatures in a conservation area where fishing was off limits.

The head of an association of local fishermen confirmed that most Mediterranean lifeforms had rejected the idea of living inside mad-made products manufactured out of rubber, resins, oil and other chemicals.

A million euros has been provided by the French state to finance the French cleanup, while tyre company Michelin has contributed €200,000.