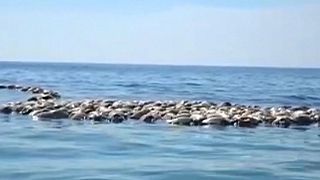 Watch: Hundreds of turtles killed after being trapped in fishing net

Some 300 turtles were killed after being trapped in a fishing net off the coast of Oaxaca state in southern Mexico.

The olive ridley sea turtles are an endangered species and one of the smallest sea turtle breeds measuring 75 centimetres and weighing 45 kilograms.

The incident came just days after 100 of the same species were found dead from unknown circumstances.

Six out of seven of the world's marine turtles nest off the coast of Mexico from June to September, and the country has developed policies to protect the reptiles.

Mexico has a permanent ban on killing turtles and on the use of illegal nets, with prison sentences for those who are found guilty.

Poachers, fishing nets, pollution and other threats have caused a sharp decline in the species.